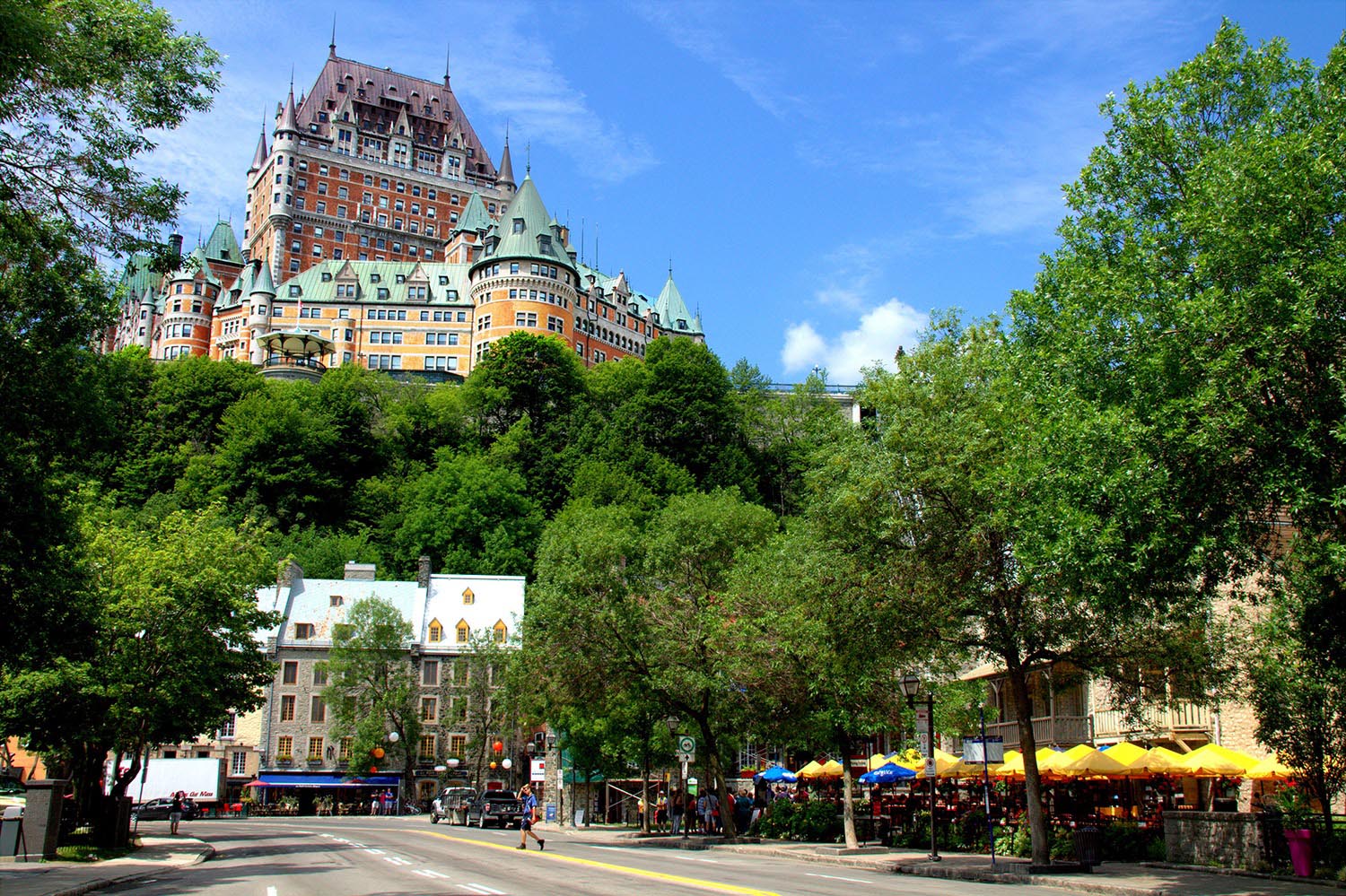 Unless you’ve been living under a rather large rock for the past, em, 400 years, chances are you are well acquainted with one of North America’s oldest settlements. Château Frontenac is just one of the many things to do in Old Quebec, but not just: some of the suggestions below are painfully obvious — hello, we are talking about a UNESCO World Heritage Site here — and others, not quite as much.

Let’s get started, shall we?

The 6 most exciting, fulfilling day trips from Quebec City

Sitting predominantly atop Quebec’s upper town, Château Frontenac is the capital’s emblem and most visited attraction. But despite its somewhat contradictory name, it was never a castle; the National Historic Site of Canada was actually built in the late 19th century as part of the series of “château” style hotels for the Canadian Pacific Railway company throughout Canada. While the now-Fairmont-owned hotel no longer offers guided tours, it is possible to step inside for a drink or a meal.

Can’t afford to spend the night? Don’t worry, you can easily enjoy the château and avoid the hefty Fairmont pricetag.

Gone are the days where Quebec City was the laughing stock of ultra foodie Montreal; in fact, Quebec has undergone a total revitalization in the past few years and is now home to numerous forward-thinking, imaginative restaurants that are well worth a visit. The 3-hours Old Quebec food tour features five culinarily and culturally significant spots showcasing the area’s historic European heritage as well as the city’s inventive streak. Bring your eating pants!

As one of Canada’s most historically-significant places, the Plains of Abraham are not to be missed. This is where the French and the British armies fought on multiple occasions in the hope of keeping their respective grip on the North American continent, until the decisive 1759 conquest. The Citadelle de Québec – the largest British-built fortress in North America – is an utterly fascinating stronghold encompassing over 200 years of military history.

Did you know, for instance, that the fortifications were not in fact built to protect the British colonies from the French army? They only reinforced the already-existing structure in case the Americans colonies further south had the funny idea to invade Quebec City.

The historical cloisters of Hôtel-Dieu, one of the most significant landmarks in Old Quebec, have been carefully renovated over the past couple of years and turned into an unprecedented combination of museum / hotel / healthy restaurant / holistic centre.

It recounts the story of the Augustine Nuns, who were pioneers in health and science when the hospital first opened its doors in 1639 with a treaty from King Louis XIII asking them to care for the sick and to open the continent’s first hospital north of Mexico. Think of this place as history meets wellness meets modern comforts and you’ve got a pretty enticing picture.

Not unlike the Château Frontenac, you can opt to stay overnight at the monastery if the visit made you want to see more. The rooms are unadorned but incredibly comfortable and restful.

If the aforementioned Augustines were all about health and science, the Ursulines’ mission was to educate and teach to girls in New France — both newcomers and natives — making it the oldest institution of learning for women in North America as their history begins on 1 August 1639 when the first nuns landed in Canada. The museum recounts their fascinating progress and the influence they had on educational systems throughout America.

Stand where it all started: Place Royale

Set foot in the cradle of French Canadian civilisation! Visit the very place where Quebec City was founded in 1608 by Samuel de Champlain.

The small square is awash with history. It served as a trading post, a storehouse, and even a fort back in the early 15th century. The gabled roofs and large chimneys are very typical of the New France era and the houses found in and around Place Royale are some of the finest examples of that genre anywhere in the country.

There are plenty of themes, ideas and neighbourhoods to go around. Just pick your favourite!

Grab some bread, wine, cheese & saucisson at the oldest grocery store in town – Épicerie J.A. Moisan in the St-Jean area. Head on over to this lovely park bordering the Plains of Abraham to enjoy underrated views of Old Quebec and St. Lawrence river.

You may have noticed that Terrace Dufferin, right by Château Frontenac, is dotted with plexiglass domes opening onto mysterious remains? Archaeologists uncovered significant evidence that the governor’s official residence, and, therefore, New France’s seat of power, stood right here from 1620 to 1834.

It is now possible to explore the remains of Château Saint-Louis. They feature 120 artefacts and are cleverly designed to be visited through an augmented reality tour.

Additionally, it’s one of the prime locations of Louise Penny’s detective novel “Bury Your Dead” featuring the popular Officer Gamache.

And while you’re at it, hop over next door to Maison de la Littérature. It’s a completely renovated public library with a Scandinavian feel to it and infinitely strong Instagram game.

It is entirely dedicated to Québécois creativity, with an obvious focus on literature. Visual arts and other mediums are also featured if that’s your thing! Don’t be deterred by the French-speaking environment. This is truly a hidden gem and one of the most underrated things to do in Old Quebec.

Drink in a 400-year old tavern

Pape Georges tavern is mostly famous for its atmospheric vaulted ceilings and its rather unusual street number at “8 ¼ rue du Cul-de-Sac”. It is housed in a 1668 stone building. For the full experience, order a Black Velvet, which consists of half cider and half stout beer. Cheers!

Founded in 1663, Séminaire de Québec is, to be official, the oldest educational institution in Canada. As such, it became a National Historic Site of Canada in 1929. It continues to wow visitors to this day, with its white-washed central courtyard concealed by a wrought-iron gate.

Marvel at the Fresque des Québécois

The gigantic, almost mind-boggling fresco recounts the heritage of Quebec City. It is located at the bottom of steep Côte de la Montagne street. It depicts the characters and events that contributed to the city’s history. I’ve seen it a few times and I don’t think I’ve actually noticed every detail yet, as the fresco is very intricate. A work of art for all to enjoy!

Charming St-Paul Street is nestled at the foot of Château Frontenac in the quieter part of the Lower Town. It is famous throughout the city for being home to the best antique shops in Quebec. These boutiques are filled with old-timey trinkets that easily fit in a suitcase!

Enjoy exhibits of international calibre as well as more locals ones at this forward-thinking, trend-setting museum in the heart of Old Quebec.

Ride the ferry across the St Lawrence River

To get the best view of Quebec City, you need to leave Quebec City – just for a few minutes! There’s a ferry service between the capital and its adjacent neighbour Lévis. Cross the St. Lawrence River, sit back, and enjoy the view that unfolds before your eyes. For a handful of change!

Walk on the Ramparts

Historic Quebec City walls span over 4,6 kilometres. They hold so many secrets that only a guided tour could possibly reveal — along with some pretty unique viewpoints. If you’d rather go it alone, climb the stairs by Kent Gate and access the top for a self-guided visit of the only remaining fortifications north of Mexico City.

The charming streets that surround the Old Port are perfect for strolling and whiling away the hours. It’s antiques stores, art galleries, and sidewalk cafés galore!

The enchanting decor is peppered with historic houses that were once home to the likes of grain merchants and wholesale grocers. At Place FAO, amid the circa 1900 architectural gems of the old financial district, lies a striking fountain sculpture.

Hop on the funicular to Petit-Champlain neighbourhood

The funicular connects the lower and the upper towns, more specifically Petit-Champlain to Château Frontenac It’s one of the most quintessential things to do in Old Quebec. That is, if you are keen on avoiding the so-called Break Neck stairs. And no one could blame you for choosing the safe option with a name like that!

Fun fact: the funicular starts in Maison Louis-Jolliet, the one-time residence of the man who discovered the Mississippi River.

Imagine a giant boardwalk, minus the beach. This is exactly what the Promenade des Gouverneurs is about! The elevated promenade connects the Plains of Abraham to the Dufferin Terrace and Château Frontenac.

Attempting to see it from one end to another is not for the faint of heart! The cliffs are really quite steep, not to mention the 300 steps to get to the very top. But the unobstructed panoramas of not just Old Quebec but Island of Orleans and the river make for a seductive reward.