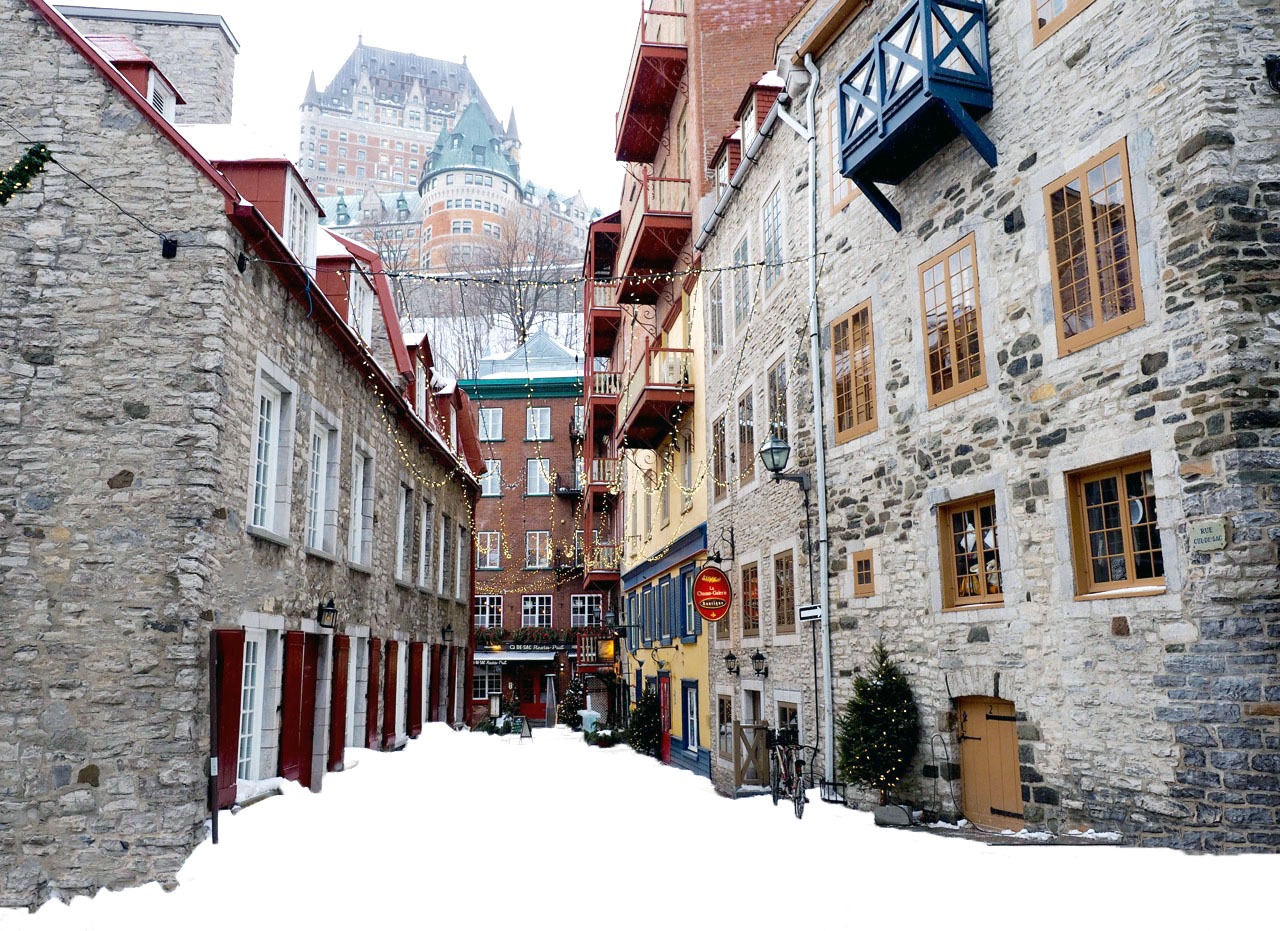 For those who didn’t know, Quebec City in winter is actually a wonderful idea; it’s a well-rounded snowy destination with lovely scenery and thrilling activities. From snow tubing to skiing, from ice canoe racing (could this possibly *be* any more Canadian) to attending the Carnaval de Québec festivities, and to romantic strolls in the old town, there truly is something to suit every taste.

Be aware, though, that now is not the time to be cute, for freezing to death is anything but.

Leave your light but stylish jacket at home, put on your long johns, your puffy anorak and your tuque: we’re about to make the most out of wintry Canada. Admittedly, Petit Champlain is one of the loveliest areas in Quebec City year round — but it simply transforms into a literal winter wonderland once snow graces its gables.

Wedged between the St Lawrence riverbank and the towering cliff of Upper Town, in the shadow of the stately Château Frontenac, Petit Champlain might be home to the colony’s oldest structures but it wasn’t always the quaint destination it is now; not unlike similar portside hamlets across the world, the district was, for the longest time, home to bandits and swindlers and hustlers and loose virtues.

The oldest part of Quebec City is equally charming as Petit-Champlain, with its striking facades and 400-years old streets. Although my feet were wet and my fingers were well past the stage of simply being cold, I couldn’t bring myself to walk away from these deserted, snowy streets as I had them almost all to myself.

And looking at the results now, I’d say it was worth the almost-frostbites.

This perfectly encapsulates what snow days mean to the average urban Québécois: quiet and deserted city streets; a literally uphill battle against the slippery, crunchy snow; and a sentiment of tranquil solitude that is only ever found during wintry strolls. Or as I like to call them, Instawalks. Not too far from Quebec City, a 15-minute car ride to be precise, the vertiginous Montmorency Falls (actually the highest in the province of Quebec at 84 metres high, a whopping 30 metres higher albeit much narrower than the more iconic Niagara Falls) are simply magnificent come wintertime.

It’s indeed quite a spectacle to admire them partly frozen over in otherworldly shapes and in the seemingly most random way; the freezing spray sent up by the cascading, gelid water forms a mountain of ice at the base of the fall which is actively frequented by adventurous climbers, as it can reach heights bordering an exhilarating 30 metres.

I would recommend spending a solid two hours in the park as there is a multitude of viewpoints from which to admire the willful falls.

As one of Canada’s most famous attractions, there is no such thing as visiting Quebec City in winter and not going the extra mile to Valcartier, where the emblematic ice hotel is now located.

Open from early January to late March, weather permitting, the ephemeral structure is nonetheless stunning in both allure and architecture. Rebuilt and redesigned every winter (as you know, summers in the province of Quebec are cold enough to keep an ice hotel running, quite the contrary in fact, as Valcartier Park is home to a water par the in summertime!).

Guests can choose to stay overnight in one of the uniquely-designed 45 rooms and suites; I’ve been told that it’s actually a remarkably comfortable experience! Body warmth and high-performance sleeping bags keep visitors toasty throughout the night.

For those only looking to visit and enjoy the spectacular facilities, that’s also possible. Whatever you do, though, make sure to indulge in the tradition and have a cocktail served in a glass made out of ice! Now in its 18th year of operation, Hotel de Glace is a truly singular destination that will have both young and not so young visitors in awe.

To most Québécois, Valcartier is the ultimate winter playground in the province – also the largest one in North America. Being a poor skier means I often resort to tubing as my go-to wintry activity (I don’t want to embarrass myself any more than I have to), and the short yet exhilarating ride down is still ever so thrilling even after 30 years.

Valcartier has over 35 slides as well as skating rinks and snow rafting for hours of fun on end.

There is plenty to choose from when it comes to outdoor sports in Québec. Cross-country skiing, downhill skiing, ice skating, snowshoeing, you name it!

Could this *be* any more Canadian? Us Québécois have decided to embrace and relish in winter instead of detesting it. Indeed, the Quebec City Winter Carnival is held every year from late January to mid-February since 1894 (!). It’s the world’s most significant large-scale winter carnival and a yearly rendezvous for many Canadians.

The programme is varied and enthralling, and often enhanced by winter sports inspired by the carnival’s French-Canadian roots. For example: ice skating, canoe race, night parade, ice sculptures and more.