No longer just the “most European city of North America,” Montreal is home to many thriving neighbourhoods – including Plateau Mont-Royal – that are just waiting to be discovered by visitors who’d like something other than the usual sights of Old Montreal.

Just north of downtown Montreal, it sprawls from the edge of the emblematic mountain to the colourful, picturesque tree-lined streets that have taken over every Montrealer’s Instagram feed.

Often regarded as one of the hippest, prettiest and overall most fun areas of the city, Plateau Mont-Royal has plenty of photogenic staircases, tastefully decorated eateries, passionate residents, and heaps of charm.

Montreal in winter isn’t as bad as you think

Plateau Mont-Royal is home to some of Montreal’s most striking frescoes, notably as part of the well-respected Mural Festival. Only in Montreal could you host an event where people are encouraged to literally paint the town. The 10-day affair is largely based in the vicinity of Saint-Laurent Boulevard and features free outdoor concerts, an art fair and guided tours.

That is in addition to the dozens of occasional commissioned works by local artists across the neighbourhood as well. Definitely something for your Instagram stories!

Montreal is frequently cited as one of the most inventive, seductive places in North America as far as gastronomy is concerned, among other things. And its supporters aren’t wrong; Montrealers are a demanding hungry bunch and they will not settle for anything ordinary. Waves upon waves of immigration — from Jewish to Portuguese to Japanese — have brought invaluable traditions to the city for a truly diverse, complex heritage that has now become the city’s signature.

And only a proper Mile End food tour (which is a district within Plateau Mont-Royal) with a knowledgeable, equally glutton guide can effectively dive in the heart of the matter that is food in Montreal. The 2.5-hour walking tour (vegetarian friendly) encompasses 5 food stops and includes at the most emblematic restaurants, including a bagel shop and a fine chocolate boutique!

From a local: 14 essential things to do in Montreal

Travelling solely to try out new coffee shops is something more and more 20-somethings do nowadays, and Montreal certainly hasn’t missed the memo. With seemingly one or two new coffee shops opening up every week, even Montrealers have a hard time keeping track!

Some of my favourite coffee shops in Plateau Mont-Royal:

The 19 most photogenic coffee shops in Montreal

Although not quite as leafy as, say, London, Montreal does quite well nonetheless in terms of green grassy spaces, especially in Plateau Mont-Royal.

Oftentimes, locals will gather friends (along with a couple of bottles of wine for good measure) for an afternoon of leisure in the sun at any given park in the neighbourhood — although most would argue that Parc Sir Wilfrid Laurier is the de facto picnic capital of the city.

Other great parks to discover in the area?

With a bike lane network comprising several hundred kilometers, Montreal is a well-known bike city. It was even crowned the “best major cycling city across the continent” courtesy of an annual raking from PeopleForBikes!

No wonder booking an afternoon with locally-owned Fitz Montreal Bike Tours have quickly become one of the trendiest things to do in Montreal.

Why not see it for yourself on a Plateau & Mile-End Montreal Bike Tour to immerse yourself in the city’s lifestyle and trendy hoods? Explore areas such as the Plateau Mont-Royal in a whole new way, along with visits in nearby Mile End, Little Italy and Outremont areas. Learn more about the musical heritage of Arcade Fire and Leonard Cohen. Sample some of Montreal’s impressive collection of murals, too!

And yes, bagels are included.

In addition to vivid murals, Montreal is a sight for sore eyes with perfectly aligned rows of houses, colourful windows and twirling iron staircases.

If I had to pick one social media platform, it would probably be Instagram. I often use it to scout locations when I plan my travels; to me, it’s easier to get a real sense of a place from a local’s point of view through Instagram than through any other medium.

There’s a myriad of ways the shutterbug in you can capture the essence of Montreal in these Insta-friendly streets, in the stretch wedged between Prince-Arthur Street and Laurier Avenue:

Plan for a nightcap

It comes as a surprise to absolutely no one that Montrealers like their drink in the evening. And Plateau Mont-Royals bars are quite abundant, and rather attractive, too.

While most tourists will mistakenly opt to stay downtown or in Old-Montreal for a nightcap, there are true gems to be found just a bit further up north where the locals go and gather to celebrate a birthday, a milestone or just a plain old Tuesday.

There are plenty of festivals and special events to take part in on Plateau Mont-Royal and not just in the warmer months, but in fact year-round.

Summer is, however, arguably the best time of the year to visit with major happenings like:

Venture into the Mile End

Technically part of trendy Plateau Mont-Royal but infinitely more diverse, this effervescent district covers just about 10 blocks but is incidentally home to Canada’s largest concentration of artists, in addition to some of Montreal’s most acclaimed restaurants. This also is where some of the most interesting shopping in Montreal can be accomplished.

Where to hang out in Mile End Montreal

Downtown Montreal is where the major arena shows will be performed; Plateau Mont-Royal, on the other hand, will welcome intimate gigs and open the stage to up-and-coming artists of various backgrounds and mediums with a promising future.

Casa del Popolo and sister establishment Sala Rossa, as well as Rialto Theatre and Fairmount Theatre, are great places to catch live music shows while The Wiggle Room is dedicated to burlesque entertainment; Montreal Improv is quite self-explanatory, while endearingly outside-the-box Mainline Theatre is indie theatre’s home in the neighbourhood.

If your French allows, don’t miss out on the chance of seeing a play in one of the area’s many legendary theatres, like La Licorne, Espace Go, Théâtre d’Aujourd’hui or Théâtre du Rideau Vert.

Put on your eating pants

Rumour has it that Montreal has the second highest amount of restaurants per capita in North America – is that the best reason to wear your eating pants or what? But with so many eateries on offer, it can be hard to pick the right ones to visit during a short trip so I’ve done the legwork for you!

Here are some of my favourite restaurants in Plateau Mont-Royal:

Sure, you could stick to the high-street and the Gaps and H&Ms of this world. But what if I told you there are plenty of cute boutiques where you could get staple pieces made with love by a local Montreal designer?

Several of the best boutiques in Montreal are located in the Mile-End area adjacent to Plateau Mont-Royal; while you’re there, make sure to head slightly east in order not to miss out on these beautiful shops:

get your montreal travel guide 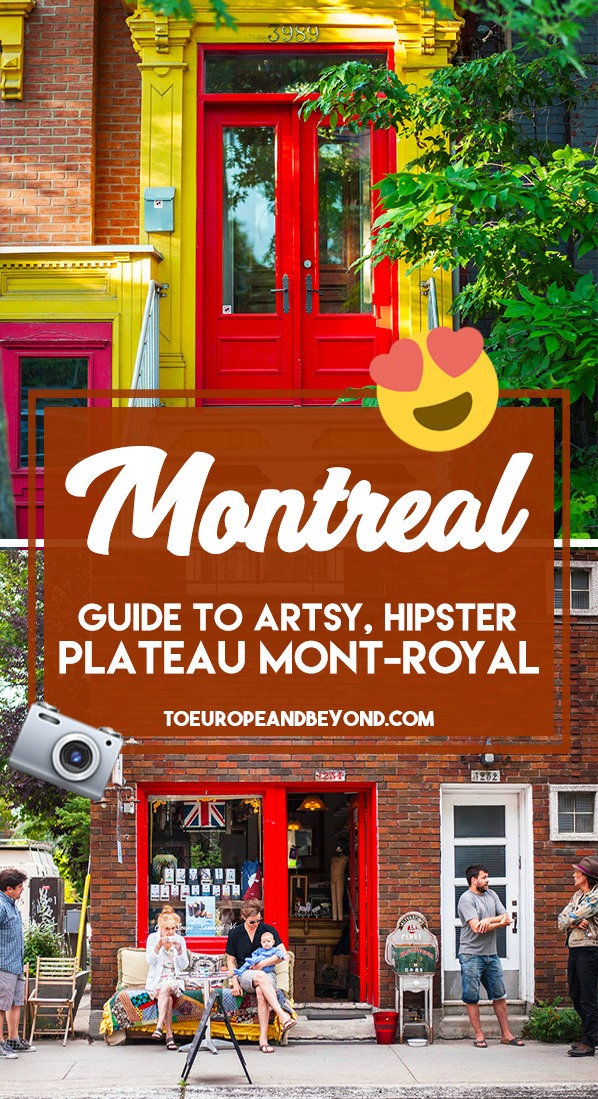