For a city that is so frequently described as wildly unaffordable and almost offensively expensive, there is an astoundingly high quantity of free things to do in London that will absolutely not break the bank. Between world-class museums and quirky attractions known only to savvy locals, here is the very proof that despite its reputation, London truly needn’t be costly.

The best parks and gardens in London

Concealed in the tranquil centre of the park’s 22.5 hectares, the Kyoto Japanese Gardens are arguably one of London’s best-kept secrets. They were donated by the Chamber of Commerce of Kyoto in 1991 and designed by a prominent Japanese garden expert, who included a small waterfall, a foot bridge, and of course, iconic koi carp.

The highly underrated West London Neo-Palladian villa, completed in 1729 by the third Earl of Burlington who drew inspiration from his Grand Tours of Italy, is remarkable enough on its own; but the real star here are the grounds, which are home to the most primitive example of the now highly acclaimed English landscape gardens.

In the shadow of Museum of London stands a little-known oasis with a rather distinctive feature: the Memorial to Heroic Self Sacrifice, a series of memorial tablets dedicated to ordinary people who died while saving the lives of others and who might otherwise be forgotten.

Sitting atop one of the highest points in London, Hampstead Heath is one of the largest — 320 hectares to be exact — and oldest public parks in the capital. It’s a popular place with locals for picnics on Parliament Hill, from which the view over London is protected by law, for a swim at the Lido, for an outing at the luxuriant and flowery pergola, for a visit of the stately Kenwood House or for a lengthy stroll along the rolling hills and woodlands.

Note that most museums and art galleries offer free guided tours, based on specific collections or simply their most popular highlights.

Bustling flower market flanked by over 60 independent, quirky Victorian shops. Give it a go, even if you don’t intend on buying flowers; the photos and the atmosphere are both well worth it. Open every Sunday from 8am to 3’ish.

London’s oldest market —a ripe 1000 years old— features dozens of foodie stalls. A great place to watch locals and purchase gourmet gifts. Note that the market is only open from Wednesday through Saturday.

Popular with both tourists and locals alike, Portobello Road Market is a bit of an institution in London. Although the market is open every day of the week aside from Sundays, the main event happens on Saturdays, rain or shine. The market has pretty much everything you can imagine, from vintage jewellery to not-so-vintage tea cups and saucers, as well as quirky royal memorabilia and cheesy London souvenirs. But what makes the market truly unique is the juxtaposition of these incredibly diverse trinkets next to the boldly coloured townhouses that Notting Hill is so famous for.

Free things to do in London

Where east truly meets west! Greenwich is home to the prime meridian, which you may know as the GMT timezone or the 0° longitude — now marked by a stainless steel strip where tourists can take photos with one feet on each side of the world.

Can’t afford the pay the rather hefty entry £18.00 fee for St. Pauls? Come and watch the acclaimed St. Pauls choir perform the choral evensong instead and enjoy the unparalleled acoustics of this historical cathedral. Be respectful of worshippers, though, and refrain from taking photographs.

The best way to explore London from Maida Vale to Hoxton, in my humble opinion, is to wander aimlessly along the bucolic Regent’s Canal, one of the city’s most underrated attractions: marvel at mansions, take a stroll in Regent’s Park, eat at Camden Market, embark on a cruise. You can even shop for second-hand books on the word on the water barge!

If you’re a fellow Harry Potter fanatic but can’t afford to visit the studios in North London, make a bee line for King’s Cross and the purposefully-built Platform 9 ¾ where you can have your picture taken while grabbing the trolley and with a gold-and-burgundy scarf around your neck, à la Harry. Conveniently located next to a Harry-Potter-themed gift shop.

Clearly, you won’t be the only one in line for what is one of the most popular free things to do in London, but the ceremony is nonetheless a quintessentially British activity, famous for its protocol and pageantry. The ceremony lasts 45 minutes and takes place daily at 11:30 from April until the end of July and on alternate days for the rest of the year, weather permitting.

Ceremony of the Keys

Perhaps one of the longest-lasting traditions in Britain — taking place each and every night at exactly 9.53pm, without fail, for at least 700 years — the ceremony of the keys at the Tower of London is essentially the traditional locking up of the main gates and securing the fortress by the tower’s symbolic Beefeaters. This is a free activity but due to the popularity of the ceremony, tickets need to be booked as far as possible in advance.

Local residents will hate me for suggesting this but I guess that’s the price to pay for choosing to live in such a musically-significant part of London. What used to be the main thoroughfare to get to nearby Lord’s Cricket Ground became a pilgrimage site of sorts in 1969 when the Beatles spontaneously shot their now-emblematic album cover right outside the studios where they had just finished recording it. Look on both sides of the road and stay safe! Definitely a must-do free things to do in London for music fanatics!

St Dunstan’s in the East

Built in 1100 (with extensive features added by illustrious Sir Christopher Wren in the 1700s), the Church of England parish church was largely destroyed in the 1941 London Blitz; only the tower, steeple, and north and south walls survived. The ruins now house a tranquil garden overgrown in ivy and climbing flowers, a well-kept secret among locals and a testament to London’s incredible resilience.

London’s Shoreditch (and East End in general) is nothing short of a mecca when it comes to street art – not to mention hipsterism and curry houses, but that’s a story for another time. Having been graced by the works of Banksy, Stik and Invader to name a few, Shoreditch has become a must-do for anyone with a keen eye for art and, possibly, an Instagram account.

London has been the set of hundreds of movies and TV shows over the decades, some of which are more evocative than others. Here are a few of my personal favourites:

Take in the free views of London

The Shard and the London Eye both offer sprawling views of the capital city town but neither of them comes cheap. Here are a few places when you can catch unusual but most importantly free views of London:

Arguably one of the most Instagram-friendly free things to do in London! These colourful cobblestone alleys were always meant for the most affluent nobility, as they were built as service streets behind the large terraced houses across London and served as a parking lot of sorts for carriages during the 17th and 18th centuries. The 433 surviving mews are no longer home to stables but instead to some of the most enviable, and therefore costly, properties in a city already infamous for its jaw-droppingly excessive housing costs.

Come pay your respects to Karl Marx and George Eliot at Highgate Cemetery, one of the most significant burial grounds in London with its Victorian features, outstanding architecture and dense vegetation. Don’t miss the stunning Egyptian Avenue! Accessing the East Cemetery is free of charge and there is a free guided tour on the first Saturday of each month.

Welcome to the second largest library in the world, with approximately 14 million books and volumes within its walls. In addition to receiving a copy of every new publication produced in the UK and in Ireland, the British Library houses several invaluable, notable works such as the Diamond Sutra (the world’s earliest dated printed book), the Codex Arundel (one of Leonardo da Vinci’s notebooks), two Gutenberg Bibles, Shakespeare’s First Folio, two 1215 copies of Magna Carta, Beatles lyrics handwritten by John Lennon, a manuscript of Alice’s Adventures Under Ground by Lewis Carroll and even the personal copy of Anne Boleyn’s New Testament translated in English by William Tyndale in 1534.

One of most underrated free things to do in London! The Blue Plaques, hemmed by English Heritage, these historical markers aim to link the people of the past with the buildings of the present by commemorating and honouring notable men and women that influenced the course of London’s history in some shape or form — including Charles Dickens, Sir Arthur Conan Doyle, Vincent Van Gogh, Captain James Cook, Samuel Johnson, Frederic Chopin, Ian Fleming, Benjamin Franklin, Jimi Hendrix, Vivien Leigh, John Lennon, Samuel Beckett, Dame Agatha Christie, Charles Darwin, Freddie Mercury and Sir Winston Churchill, to name a few.

Started in 1866, the Blue Plaque scheme is thought to be the oldest of its kind in the world. There’s a really cool app you can download and use as a guide through the memorable streets of London. For a full list of Blue Plaques in London, check out Wikipedia’s entry.

Discover you stand-up comedians at the Angel Comedy club every night of the week with their rigorously-vetted open-mic comics, from improv to solo acts — you might get lucky and catch a top comedian testing new material. It’s all technically free, but if you liked the show, a voluntary donation is always welcome.

There are so many different companies offering free tours of London that it’s actually quite difficult to choose! Strawberry Tours, New Europe Tours, Free London Walking Tours all do a pretty decent job, from lavish Kensington to artsy Shoreditch. Tours are all free but if you had a nice time and learned something, it’s customary to leave a tip at the end. 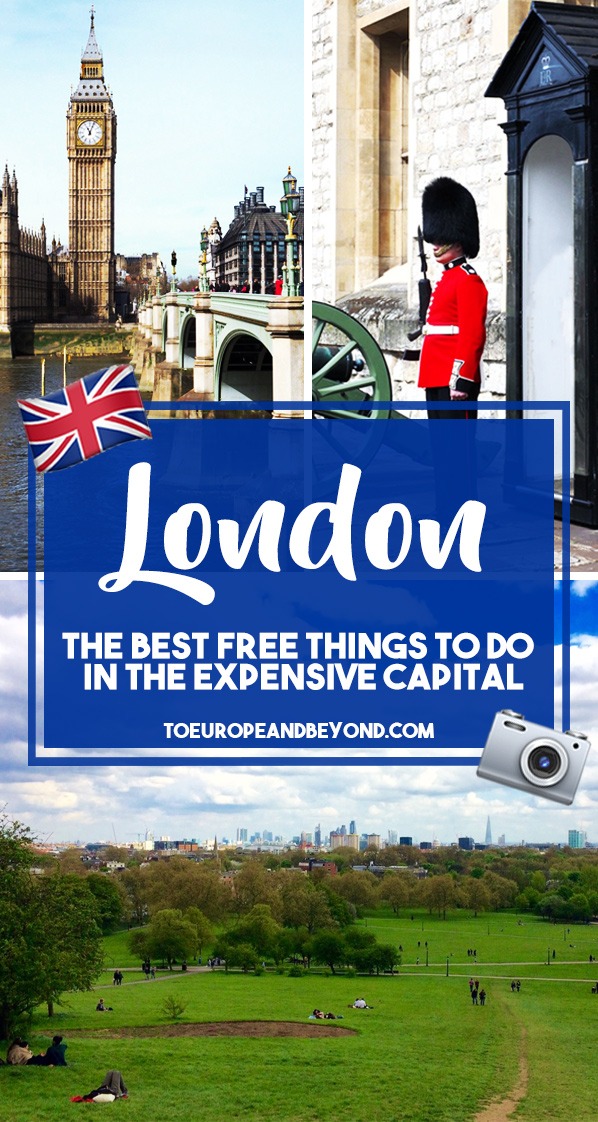