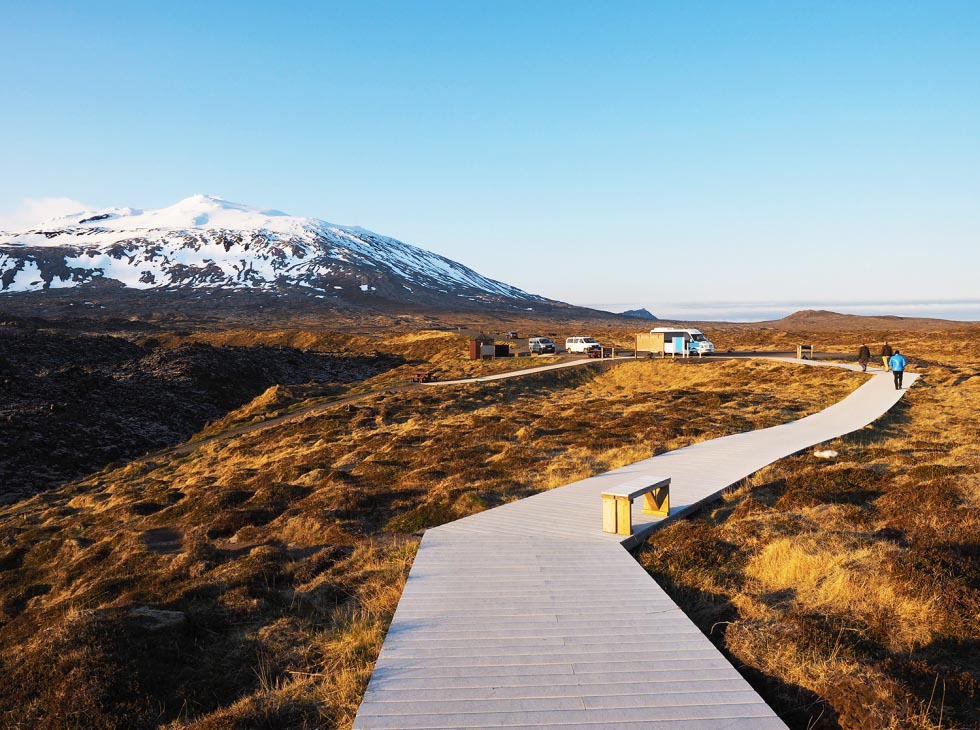 You can imagine my reaction when I got Icelandair‘s invitation on what had otherwise been a largely crappy day (hint: it involved high-pitched sounds and clapping). As you well know by now, I’m a little bit obsessed with all things Iceland and, on a broader level, Scandinavia; I accepted the invitation immediately, excited to discover a new-to-me part of Iceland, as I’d only ever been to the southern part.

As I sat down on the plane on the inaugural flight from Montreal to Keflavik, entertained by the aurora light effects on board (yes, you read that correctly), I smiled at the journey ahead of me. Here’s what I did during four *insert a multitude of heart eyes emojis* days around the stunning  Snaefellsness Peninsula.

A lot of people describe the Snaefellsness Peninsula as a mini version of Iceland, for it encompasses everything that makes Iceland so special: dramatic coastlines, lava fields, waterfalls, glaciers, and lunar-like landscapes. If you haven’t got a whole lot of time in Iceland (if you’re on one a stopover, for example), travelling to Snaefellsness will give you a bit of a preview of what Iceland as a whole looks like.

What is perhaps the most photographed mountain in Iceland doesn’t fail to impress. Framed by the quaint Grundarfjörður village on one side and the Kirkjufellsfoss on the other, this unusually-shaped peak is one of the best and most loved aurora-watching spots in the country; it really makes me excited by the prospect of visiting Iceland in the winter. If you do visit in the summer, however, I suggest you get yourself to Kirkjufell at sunrise or in the morning to get optimal light for photography.

Get ready for superlatives: this adventure takes visitors to Europe’s and Iceland’s second largest glacier, which is also the world’s largest man-made ice cave and one of the deepest, at 40 metres below the surface. Into the Glacier truly puts “ice” in Iceland, as glaciologists and geologists have worked together to open this 500-metres long subterranean gallery, which is only accessible by specially modified four wheelers (that were once used to carry missiles back in the NATO’s Iceland days, NBD). While many of Iceland’s glacier tours take place in naturally-formed ice caves at the edges of the glaciers, this one is entirely man-made, and located right smack in the middle of this ice monster.

Although not nearly as powerful or vertiginous as its southern counterparts, Hraunfossar is still quite special in the sense that the spring water that flows through it travels subterraneously for over a kilometre, under a dense lava field (because Iceland) before it reaches the actual waterfall.

I’ll be writing about this seaborne adventure shortly as I believe it deserves its own post but in short, if you find yourself in Stykkishólmur, DO IT. The Viking Sushi adventure is not only incredibly scenic but also informative: the captain enthusiastically explains everything there is to know about the abundant local wildlife and the science behind the oddly-shaped basalt islands that dot the Breidafjordur Bay. As the cruise’s name suggests, we did get to eat fresh seafood on board; trust me when I say that those salty scallops were for the books, and that’s coming from someone who doesn’t even like seafood under normal circumstances. That’s how good they were.

Last but not least is the incredibly photogenic pebbled beach and lava field of Djúpalónssandur, on the very western tip of the peninsula. It’s one of the very few ocean access points in an area that is otherwise mostly made up of dizzying cliffs; as such, it used to be a thriving fishing community. Although signs of this bygone era are rather scarce nowadays, if you look closely you will get to see “strength stones”, ranging from 23 to 154 kilos; prospective fishermen who couldn’t lift all of them effortlessly were deemed unsuitable for a life at sea.

Would you have made it as a Viking? Only one way to find out ;-)