The longer I live in France, the more I come to realise that there’s so much more to this hexagon-shaped country than its capital. Mind you, Paris is a city like no other; but so is the rest of France, with exciting and historic cities like Bordeaux.

With just one day to spare in the area before I headed towards Arcachon and Saint-Émilion, I power-walked through the wine capital of France (that’s saying something), snapping at its gorgeous medieval architecture and its plentiful, sprawling terraces filled with locals having after work drinks.

Bordeaux’s emblematic architectural heritage consists of a clever mix of modern and ancient: from the 15th-century city gates to the maze of medieval streets, and from the sumptuous peristyle of the Grand Théâtre to the modernism of Miroir d’eau – the largest of its kind – which perfectly complements the classicist style of Place de la Bourse. It doesn’t come as a surprise, then, to learn that New York Times made Bordeaux the second most interesting place to visit in 2016!

Built in 1495, this dramatic Gothic Revival 35-metres tall city gate was built to commemorate King Charles VIII’s victory at Fornovo in Italy during the Italian War of 1494. At the time, it was the main entry point to Bordeaux from the port. It faces Place du Palais and features several ornamental sculptures and towers, something that is very typical of architecture built under the reign of Charles VIII; indeed, the monarch wanted this gate to showcase his power and affluence. The gate, which was once part of the Bordeaux city wall, was later on used as a defensive tower (the multitude of portcullis, murder holes, and machicolation features are there to prove this), and as a salt scale and storehouse.

Walking onto Place du Palais, it makes complete sense to think of Bordeaux’s medieval centre as a UNESCO World Heritage site. The many terraces, which are surrounded by a peaceful pedestrianised square, offer stunning views of Porte Cailhau pictured above. A great place to have a glass of local,full-bodied red!

Another place that took my breath away is the Place des Quinonces, just a few minutes off Place de la Bourse. While the square itself is set in a quite plain location, the eponymous Monument, which celebrates the French republic, is the real star of she show. Between the double-faced fountains and the sky-high obelisk, I didn’t have enough eyes to look at everything.

The level of details on fountain’s sculptures are quite amazing, and just when you think ‘wow, it doesn’t get better than this‘ – well, it does. Right on the other side of the monument is an equally impressive set of sculptures that tell another side of the republic’s story. Mesmerising, I tell you!

Behold the famous Pont de Pierre. It was built after very strict orders of Napoleon Bonaparte the 1st himself, whose 17 letters-long name will forever be associated with the 17 arches long bridge.While one could think the Pont de Pierre was named after one of the many worthy Pierres that have marked French history, each in their own way, the explanation is actually much simpler – it’s named after what it’s made of:  stone.

While one could think Pont de Pierre was named after one of the many significant and worthy Pierre’s that have marked French history, each in their own way, the explanation is actually much simpler, as it’s only named after what it’s made of:  stone.

Place de la Bourse was definitely the highlight of my visit. My photos don’t do justice to the place at all, you really must see it for yourself to understand just how large and impressive it is.

Ions away from the otherwise medieval historic centre of Bordeaux, this royal square marked the first steps of Bordeaux’s expansion outside its seemingly impassable city walls. The lavishly ornate features were meant to be a reflection on Bordeaux’s newfound prosperity, as it opens onto the major waterway that is the River Garonne.

Built in the 18th century and now known as the Bordeaux National Opera, this sumptuous concert hall is still, to this day, one of the best and most appreciated in the world. The rectangular-shaped building features 12 stunning Corinthian columns which denote an unmistakable Greek influence. Get tickets to a concert whenever possible; it will be an unforgettable experience!

Numbers don’t lie: Gironde’s 65 controlled designation of origin labels make it the largest wine-producing department in France. Over 60 different circuits are offered by the Bordeaux tourism board in high season, including a coach excursion with an expert guide, a fully independent multi-day road trip or even an active bike adventure in the green rolling vine-covered hills of the region. If you have specific destinations or wineries in mind and you’d simply rather see where the road takes you, the Bordeaux Wine Trip app is a neat way to create your own itinerary based on your personal preferences.

Mind you, Bordeaux has an enviable wine scene of its own: there’s even an interactive and whimsical map, the Urban Wine Trail, solely dedicated to the best wine bars in the city. The suggested oenological sanctuaries were handpicked either because of their sun-filled terrace, their typical South-West delicacies or their surprising wine list encompassing both local and international vintages.

Other fun things to do in Bordeaux 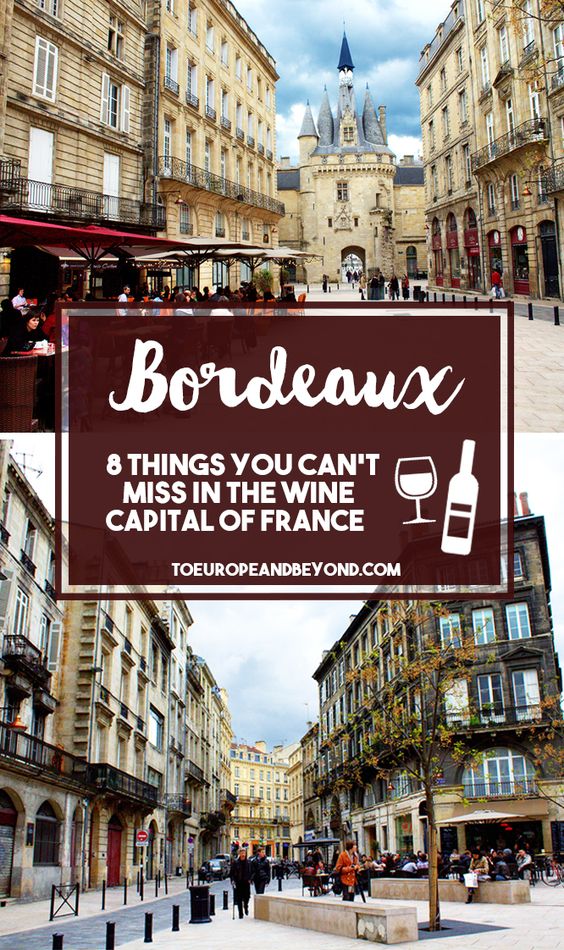