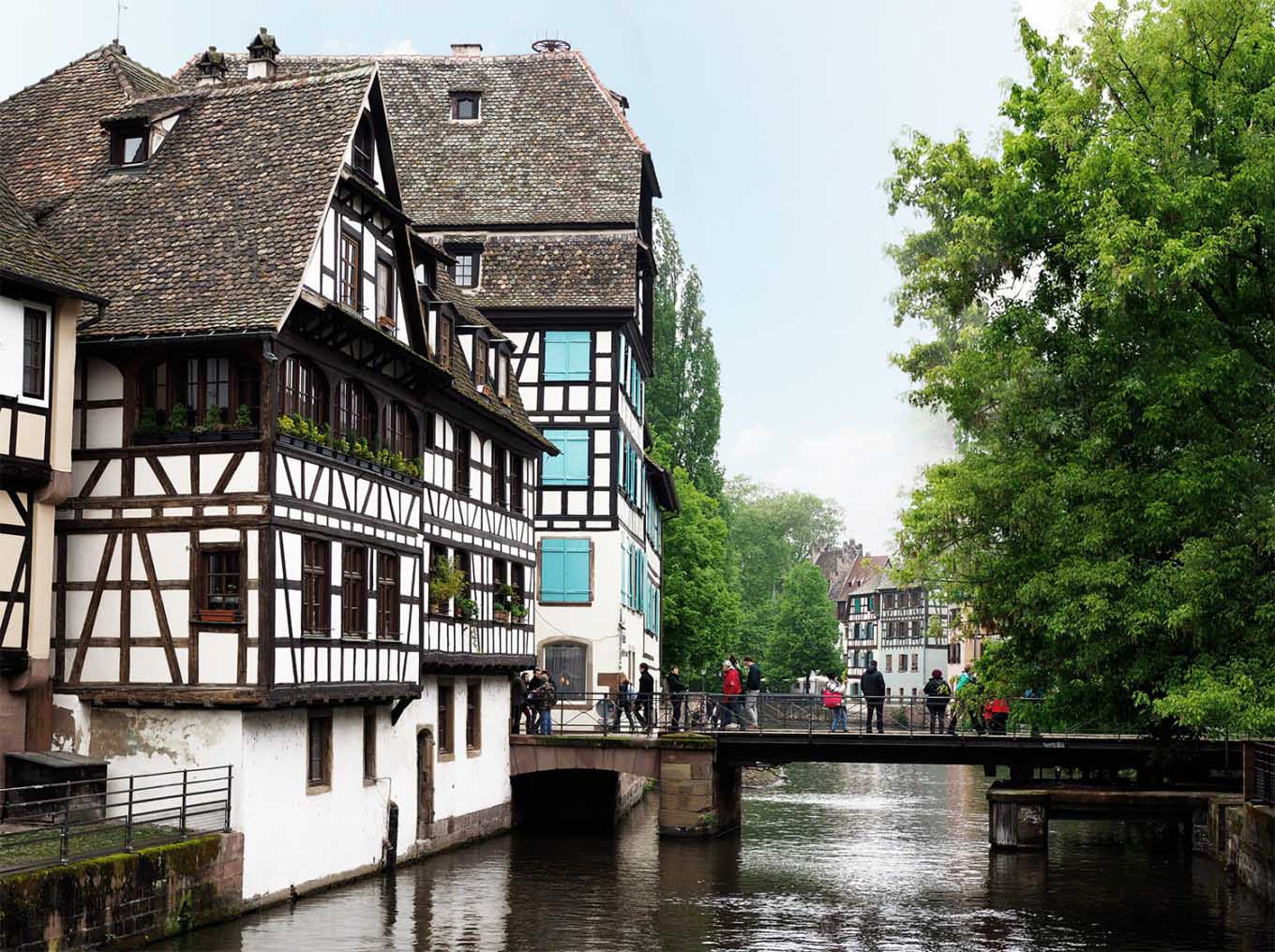 With candy-coloured villages that look like they could be in a children’s bedtime story and an abundance of gastronomically-heavy sins governed by centuries of traditions, and with a culturally complex heritage, Alsace is unquestionably a sight for sore eyes.

Panoramas stretching between Strasbourg and Mulhouse, flanked by the soaring Vosges mountains, are dotted with ruby-coloured fortresses, rolling hills striped with luxuriant vines fueled by the mighty Rhine River, and make for an infinitely interesting incursion into la province.

Miraculously unscathed by the widespread ravages of both great wards —at least, nowhere as extensively as other French and German regions— Alsace is culturally sandwiched between Germany and France and yet has only been officially part of the latter since 1945. It was, however, regularly contested and handed over by both countries as their frontiers evolved ever since the Thirty Year’s War.

The local dialect is, in fact, much closely related to Swabian and Swiss German than it is to the region’s national language, French.

This is precisely what made me so interested in the region at first; that dual identity. How it is so definitely French in some ways, yet infinitely German in others, and how, at times, it is neither, simply 100% Alsatian.

In preparation for your trip to Alsace, here are a few places I myself have visited (believe it or not but I did squeeze in a few cultural stops, not just wineries) and which I strongly recommend. Bon voyage!

As the seat of the European Parliament and many international organisations, Strasbourg has so many different faces it’s hard to find the right word to describe it. Über-modern in some areas, beautifully historic in others, it boasts an eclectic combination in both its culture and its architecture―it is, appropriately, Alsace’s capital city.

The first place you want to visit in Strasbourg is the Petite France neighbourhood, the oldest part of the city. It comprises multi-centennial half-timber houses, numerous canals, impossibly charming cobblestone streets and mature trees, which, in addition to being picture-perfect, certainly make for an enjoyable backdrop for an indulgent post-dinner stroll.

Speaking of which, I recommend that you try the famous flammkuchen, a traditional Alsatian pizza with extra thin crust topped with crème fraiche, lardons and thinly sliced onions.

Another important stop is the Strasbourg Cathedral. It was the world’s highest structure for well over 200 years (and now the 6th tallest church), it’s one of the finest works of the late Gothic architecture. Visible far across the plains of Alsace and sometimes as far as the Black Forest on clear days, Strasbourg Cathedral is famous for its intricate, detailed carvings and its characteristic pinkish hue. Entry is free of charge.

If you visit in the summer, make sure to plan some time to attend the very entertaining daily light show at 10 PM.

My favourite place on the entire itinerary! This is a “postcard” kind of place, with impeccably preserved timbered houses in various rainbow colours.

It’s a very small village, with just one main pedestrian street, but I can’t stress how much it is worth going. It felt like walking in a medieval dream as if everything had remained untouched for the past six centuries. The main street is flanked by local artisans, flowers, wine cellars, cafés and quaint B&Bs.

Shortly after Riquewihr, you will be entering the heart of the vineyard region. Don’t hesitate to stop and explore, go winery-hopping (with moderation, of course, unless you want to walk all the way back!) and taste the many wines the region is famous for, like riesling and gewürtztraminer, as well as crémant, the Alsatian alternative to Champagne.

The second idyllic village on this Alsace road trip didn’t disappoint. It is a little bigger than Riquewihr in size and boasts the same type of medieval charm, except this time, the postcard is complete with castle ruins.

One of the best reasons to go to Kaysersberg is to enjoy the magnificent view of the village and the surrounding vineyards from the castle remains – although your calves may not agree at first, the view from atop the guard tower is infinitely worth the short hike.

You will not be able to enter the village with your car, but it’s just as well since you get to walk by the canal and its beautiful houses on your way to the main square. Enjoy the pedestrian life, grab some ice cream and sit at one of the many terraces and indulge in some good old-fashioned people watching.

Last but not least on this idyllic Alsace road trip, Colmar. Not a village by any means, Colmar is a midsized French town with an attractive historical centre that is easily walkable.

There are many interesting sights in Colmar in addition to its magical atmosphere, such as the House of the Heads, whose facade is, unsurprisingly, decorated with 111 heads. Nothing creepy, rest assured, it is in fact quite a work of art.

Nearby is also the famous Pfister house, St.Martin’s church, Bartholdi Museum (the architect behind the Statue of Liberty) and the Little Venice neighbourhood (something about the canals…).

For dinner, I opted for another typical Alsatian winstub called Restaurant des Tanneurs and was impressed with the cosy feeling of the place, decorated with large wooden beams and dim lights.

That’s when the Alsace road trip actually begins! Hop in your car and head south to the stunning Haut-Koenigsbourg Castle, an important stop between Strasbourg and the smaller vineyard villages. Nestled in the Vosges mountains, it dates back to the 12th century and is a sight for sore eyes, both the castle itself and the scenery of the Alsatian plains. It is everything like what we, modern-age people, imagine what a medieval fortress looked like.

The local tourism board, Tourisme Alsace, is a great resources to plan your trip and find noteworthy sights for you to stop at along the way:

Pretty self-explanatory, isn’t it? Check out Wines of Alsace for inspiration, if you’re looking for a specific vigneron or fancy a particular cépage. Obviously, do not drink and drive. EVER.

Hike in the Vosges

There are plenty of bucolic, postcard-worthy hikes to be done in Alsace especially as you inch closer to the Vosges mountain range; Le Ballon is the tallest peak at just 1400 metres via the iconic Route des Crêtes.

An exceptional 17th-century fortified town designed by the illustrious Vauban, Louis XIV’s military engineer, later on Marshal of France, and considered the foremost engineer of his time; his most fervent admirors claim that he strengthened the French identity by consolidating the Hexagon’s borders with his unsurmountable fortresses. Neuf-Brisach is now listed as a UNESCO World Heritage Site.