Being the Britophile that I am, needless to say exploring the depths of Scotland was always a dream of mine (whether or not Scotland actually belongs in Great Britain is a story for another time). So there I was, embarking on the Highland Fling, which is a 5-day tour of the main sights of Scotland.

And while the sights were gorgeous from start to finish — regardless of the crazy weather — my heart swells the most when I think of the Isle of Skye. One of the few places in Scotland to retain a strong traditional Scottish spirit in the most literal sense of the word,  a history shaped by the Scottish wars, Viking legends and faeries, and home to some of the most incredible scenery I have ever laid my eyes upon.

Here is, ladies and gentlemen, the Isle of Skye. Our first stop was on the middle on a desert road on the way to Portree, the capital. The Isle of Skye being so secluded, there is no such thing as traffic jams or heavy circulation. Far from being a bad thing — who would want this sight ruined by honking and speeding cars? — I was able to enjoy this windswept, brooding scenery at my own pace and in complete silence. These are the mighty moody Black Cuillin Mountain, located just outside of Sligachan and whose silhouette dominates the entire island.

I particularly like how the panorama shot exposes the varying weather of Scotland — blue skies and sunshine on the left, and fogpocalypse on the right. 4 seasons in one day. In one hour, if you’re lucky. And then there was Portree. The main settlement of the so-called “winged isle”, populated by no more than 3,000 souls, is mostly known for its picturesque harbour — understandably so. Fringed by cliffs and colourful shop facades, it is a fine place to have a picnic on the odd sunny day (but from what I’ve been told, there aren’t that many sunny days in these parts). With shops, restaurants, banks and hotels, Portree is where the party is at on the Isle of Skye.

Portree is also the capital of the Gaelic language, where over 30% of the population speaks it fluently, as opposed to a mere 1.2% in the rest of the country, thanks to the aftermath of the Battle of Culloden in 1746. This town and the Outer Hebrides really are the stronghold of this declining language, and hearing it being spoken by locals on the streets gave me a whole new perspective on it.

Not one for hiking but not one to miss out on photographic opportunities either, I found myself just past the feet of Old Man of Storr in the  Trotternish peninsula. The hike up a nearby, rather high hill offered an unparalleled vista of Loch Leathan on the right, and the Sound of Raasay and mainland Scotland in front. It was quite the striking sight, with snow-capped mountains in the distance and turquoise water that I thought only existed in the Caribbeans. 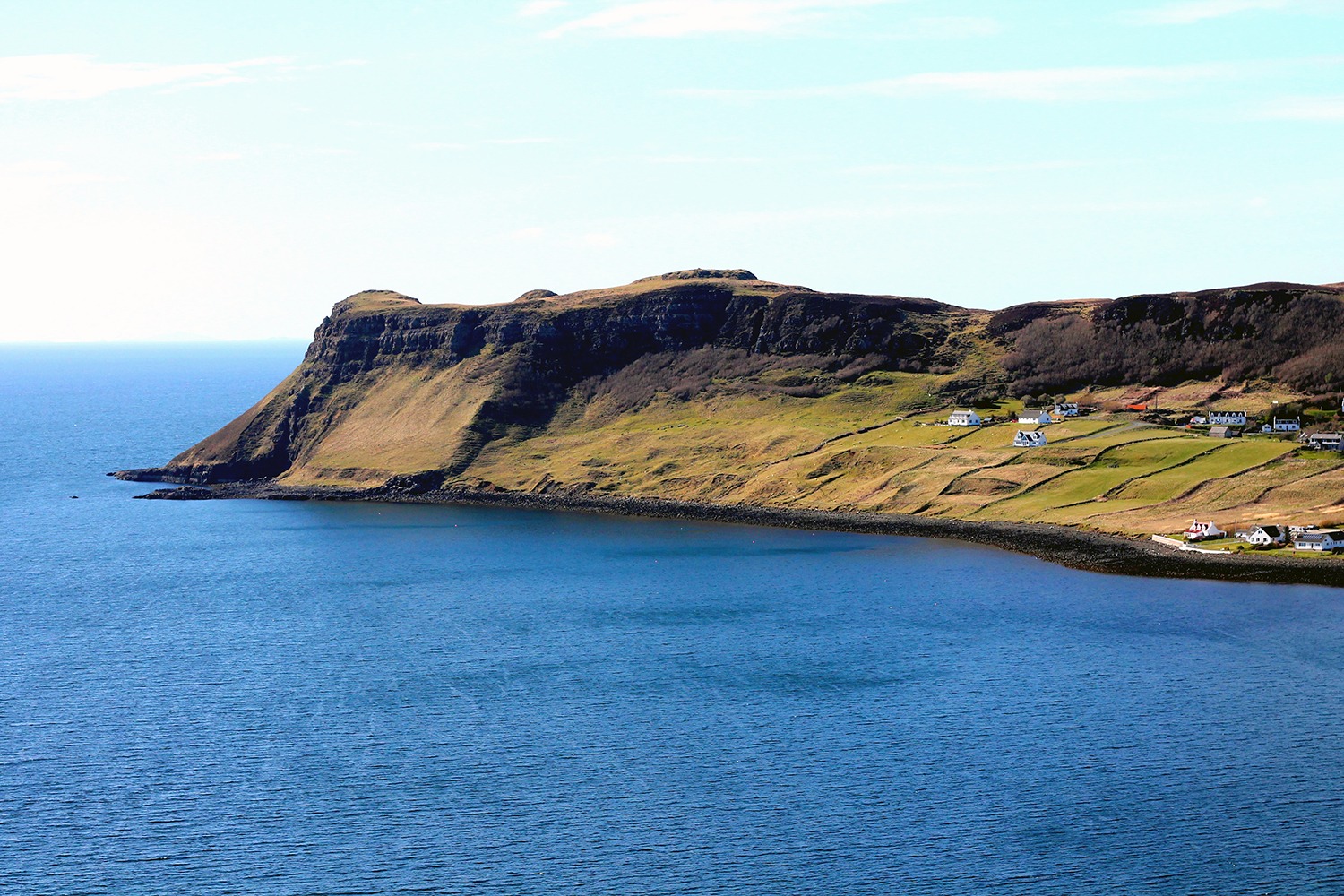 And then a chilly wind brushed my cheeks and reminded me that I definitely was in Scotland.

And this is the Quiraing, or Meall na Suiramach in Gaelic. One of my most liked photos ever and one that is solely filter-free. Just raw, unadulterated beauty. Part of the Trotternish Ridge escarpment, which was formed by several consecutive landslips, this particular area is the only one still moving today, and the road at its base requires repairs every single year. The view from the part called The Needle offers incredible views of mainland Scotland and the Torridon Hills, which are made of some of the oldest rocks in the world.

Fun fact: rumour has it that the most isolated parts of Quiraing were used to conceal cattle from the Vikings.

As if the day hadn’t been wonderful enough, it ended on an even higher note than I expect at the tiny Saucy Mary’s Lodge in Kyleakin, the entry point of the Isle of Skye. Freshly caught haddock, locally made Thistly apple cider, a good chinwag with a few of the locals and the mother of all sunsets definitely make for a great evening in my book.

What a magnificent parting look it was.

Is this what the Deep Scottish Love feels like? Isle of Skye – Good To Know:

Disclaimer: I was a guest of Haggis Adventures. But as always, my opinions are my own. The Isle of Skye really rocked my socks.